Wheaties is an iconic brand that has been a part of American culture for nearly 100 years. In 1934, Wheaties honored Lou Gehrig as their first cover athlete and has celebrated champions on their iconic orange cereal boxes ever since.

Some of the greatest athletes in history have been honored on Wheaties boxes. The team behind “The Breakfast of Champions” have redefined what it means to be a Champion and to champion, reserving their cover for athletes who are using their sports platform for something greater.

James takes over the cover from Serena Williams, both of whom were named Associated Press Athletes of the Decade earlier this year. James will continue Wheaties’ 85 year-run of featuring sports champions on the collectible boxes. Celebrating James on a Wheaties box isn’t merely a celebration of his athletic prowess.

COVID-19, record unemployment rates, political posturing and racial unrest have hurled us into historically challenging times. In these moments, certain athletes, celebrities and leaders have used their platforms to champion for those whose voices aren’t being heard.

Therefore, the box looks a little different this time. Alongside James is a collage of kids and families from the LeBron James Family Foundation’s transformational I PROMISE program in Akron, Ohio.

The wraparound image includes students and staff from the I PROMISE School, the groundbreaking Akron Public School opened by James and the Foundation in 2018 that serves the district’s most at-risk students and their entire families. The school and the Foundation’s comprehensive programming have redefined the community of Akron and is a testament that James has never forgotten where he came from. No matter how much on court success he has had, his legacy is much bigger than basketball.

James continues to lead the NBA other pro athletes who have been at the forefront of fighting against systemic racism, social injustice and inequality. You can’t tell the story of LeBron James the elite athlete without mentioning his philanthropic efforts, widespread activism, film and media offerings and cultural leadership.

“We all know LeBron James for his record-breaking basketball career, but his achievements off the court truly set him apart,” said Taylor Gessell, brand experience manager for Wheaties. “From starting the LeBron James Family Foundation, to boldly speaking out on racial injustice, to launching the I PROMISE School – LeBron is a champion of change who is using his sports platform to better the world. We couldn’t be prouder to feature such a positive force of inspiration for the next generation of champions on Wheaties’ historic box.”

James grew up in Akron, Ohio, where he leaned on his family, friends and community to uplift him up when times were tough. He was a standout high school player for St. Vincent-St. Mary before being drafted as the No. 1 overall pick by his hometown Cleveland Cavaliers.

Now he can add Wheaties Champion to the list.

“Growing up where we come from, to see my I PROMISE kids and families from Akron, Ohio, represented on the iconic Wheaties box means everything,” said James. “The movement we’ve started in Akron is about doing our part to uplift our community by first listening and then responding with the resources they need. We will continue to do everything we can to create a better future for our kids and our community, and it starts with the students, teachers, and everyday champions you see on this box.”

James’ leadership and impact have always spanned well beyond the basketball court. In 2004, James, who proudly refers to himself as “just a kid from Akron,” started the LeBron James Family Foundation to give back to the same community that changed his life. 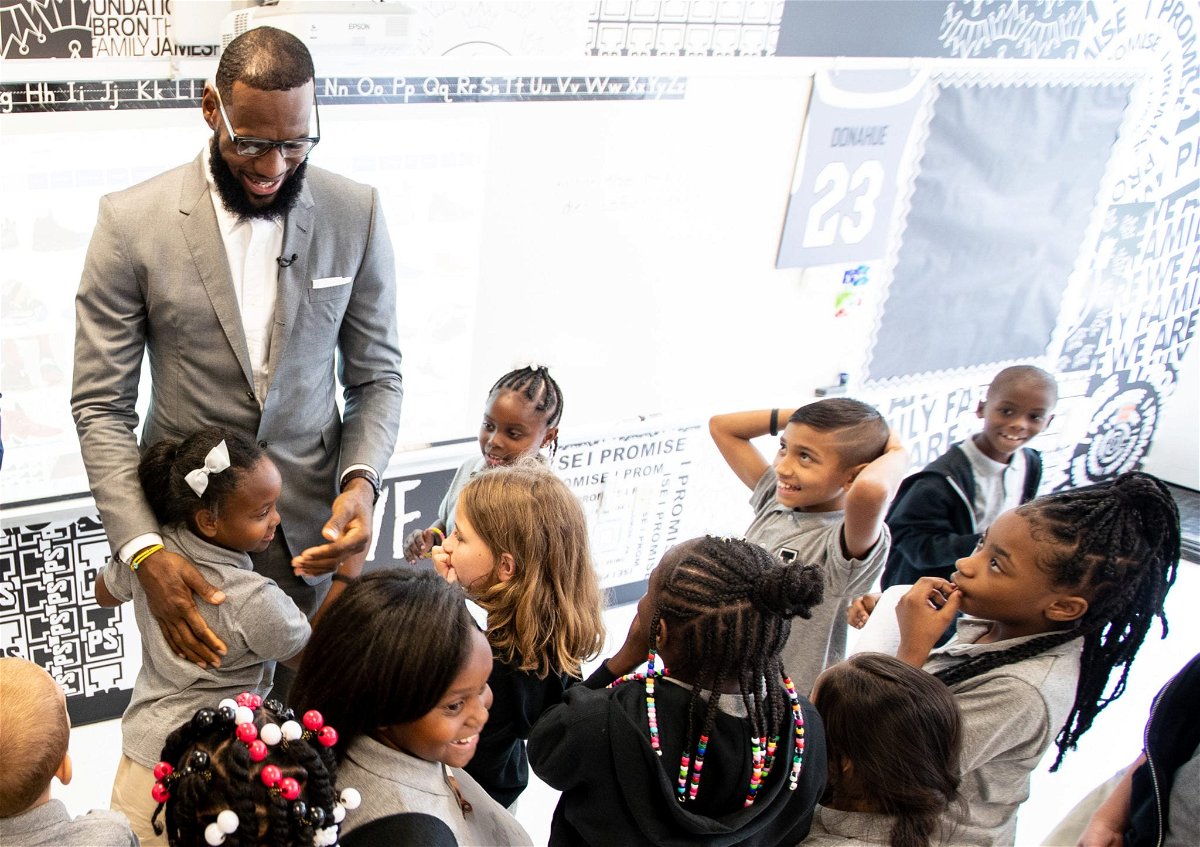 LJFF started by organizing community events and in 2011, refocused its efforts on education. In 2018, LJFF opened the I PROMISE School, dedicated to giving Akron’s most challenged kids the resources and support they need to excel in school and beyond. With its Family Resource Center, the Foundation eliminates barriers families face with access to job support, legal aid, healthcare, GED classes, financial literacy programs, and an onsite food pantry.

For those experiencing homelessness, the Foundation opened the I PROMISE Village to provide transitional housing. LJFF has also guaranteed tuition to The University of Akron or Kent State University for every eligible I PROMISE graduate. James and his Foundation have started a movement that is transforming the future for thousands of Akron families.

“Having our students, families and educators on the Wheaties box alongside LeBron is pretty powerful, and it illustrates that deep and meaningful work cannot be done alone,” said Michele Campbell, Executive Director of the LeBron James Family Foundation. “It takes an entire community to truly rally around those that need it most, and it takes a lot of passion and hard work. But it can be done, and we’re humbled to continue pushing the envelope on what’s possible for these families and all communities across the country.”

The limited-edition LeBron James and I PROMISE Wheaties box will be sold on www.Shop.Wheaties.com now and will roll out on store shelves in the U.S. in the next several weeks.