For the past four years, Demar Derozan and Kyle Lowry have been building an undeniable, winning chemistry. When they hooked up in 2012-2013, Toronto was in the midst of a three-year streak of futility in which they hadnt finished higher than ninth in the conference. The two young players, both fighting for props in an unforgiving NBA, immediately clicked like Havoc and Prodigy in the early ’90s.

Fast forward to 2016, and after disposing of Paul George and The Pacers (And being the straw that broke Frank Vogel’s back) in the playoff’s first-round, the Toronto Raptors are tied with the Miami Heat 1-1 in the semifinals of the Eastern Conference playoffs. They have serious and realistic goals of reaching the franchise’s first-ever NBA Conference finals.

Thursday nights playoff game was one of the most important games in Raptors history. Toronto risked falling behind 2-0 in the series and Lowery picked the wrong time for his streaky shooting to crash the scenario. Lowery, who had some huge performances for Toronto this season, is shooting a Pep Le Pew 9-for-57 from three-point land in these playoffs.

As close-knit as these guys are and as in tune with each others game and spirit as they have become, its no surprise that DeRozan is also struggling with his shooting, averaging a career playoff-low 33.7 % shooting and 18.6 points per game. Combined, the two stars have hit on just 14 of their last 46 field goal attempts. The questions keep coming about their shots, but the wins keep flowing as well.

Despite the lack of offensive efficiency of late, Torontos dynamic duo is the epitome of toughness, relentless effort and knowing how to win ugly. They are the anti-Golden State, but it seems to be working out for them. In Game 1, despite a miserable shooting performance, Lowerys clutch half court trey sent the game into overtime, giving the Raptors a chance to win.

On Thursday, it was the bulldog in Lowery that lifted Toronto to a 96-92 overtime win over Miami. Sure, he shot 7-for-22 from the field and hit just 1-of-7 three-point attempts, but just as Miami opened up a seven-point fourth quarter lead, Lowery hit two critical jumpers to help get the game into overtime. A lunch pail team effort, highlighted by the play of DeMarre Carroll (21 points) and third-year Lithuanian 7-footer Jonas Valanciunas (15 points, 12 boards), clinched the deal. 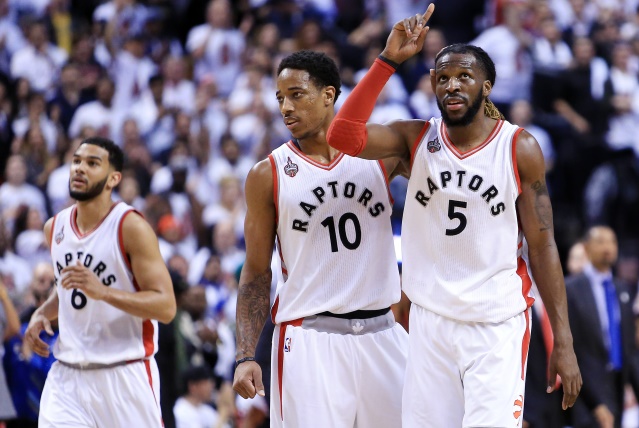 When asked about his month-long shooting slump, Lowery simply said, …shots didnt fall last game, but I know they’ll fall in the next game.

Its that kind of confidence and unwavering determination and belief that has endeared Lowry and DeRozan to Raptors fans.

To most fans outside of Canada, however, theres nothing very attractive about being a Toronto Raptor. These guys are slowly altering that narrative.

The franchise was live back when nasty newbies Tracy McGrady and Vince Carter came on the scene and increased the Raptors visibility and basketball credibility.  The high-flying, incomparably athletic blood ballers were a must see ticket in an era when Allen Iverson was the new Human Highlight Film and a cultural icon,  San Antonio was seasonally lethal and Kobe and Shaq ruled the NBA landscape. Since then, however, when the Raptors come to town, nobody is bum rushing the box office for tickets.

McGrady was selected ninth overall by the Raptors in the 1997 NBA draft. Vince Carter hit the scene one year later in a draft-day trade with the Warriors that sent fellow UNC stud Antawn Jamisonwho was selected fourth by Torontoto Golden State.

In two memorable seasons (1998-2000), the cousins led the Raptors to a record of 68-64 and the stretch included the franchise’s first-ever winning season, 45-37, in 2000, and first NBA playoff appearance. Serious impact.

Then McGrady bounced to his hometown of Florida and signed a six-year, $67.5 million free agency deal with the Orlando Magic. Vinsanity held it down for awhile after McGradys departure but it wasnt the same.  He eventually left as well.

In their last season together (2000-01), McGrady and Carter both made All-NBA Second Team. Chris Bosh tried to keep Toronto relevant for a while before taking his talents to South Beach and playing third-fiddle to King James and Killer Wade for two championships, but the excitement and national interest was never the same in Toronto after the cousins split up.

This Toronto Raptors squad has a similar chemistry and team structure based on its two superstars leading a roster filled with some crafty veterans who are willing to play complementary roles.

Lowry and DeRozan bring a similar energy, excitement and chemistry, attitude and youthful exuberance that McGrady and Carter shared.  And unlike Torontos previous franchise pieces, this tandem is looking to stick around a while and raise the stakes for NBA basketball in Canada.

The first year together was a transition period. But since that 34-win season, Toronto hasnt been higher than a 4th seed, and despite playing in Canada — a place where no NBA superstar or big name free agent would probably ever come play — the dynamic duo have developed a unique friendship and carried the hoop hopes of an entire country on their backs.

The Raptors have set franchise records for wins in each of the last three seasons, improving from 48 wins to 49 wins to the franchises first 56-win season this year.

DeRozan, a first-round pick out of USC in 2009, has been with the franchise his entire seven-year career and hes steadily improved and established himself as one of the NBAs most lethal bucket baggers and though quiet in demeanor, hes accepted his role as a leader.

DeRozan didnt have an ace to roll with in his first couple of seasons and he didnt have an All-Star veteran to teach him how to approach the game and be a franchise player. Lowry and DeRozan had to learn how to repel the giants and compete against higher paid and more talented, celebrity players from major media markets, on the job.

Early in his career, the 6-foot Lowery bounced from Memphis to Houston and shared time with other players at the point guard spot. It wasnt until he came to Toronto that he started every game and played more than 75 games in a season.

The East is as wide open as its ever been. Cleveland is the clear favorite to return to the NBA Finals, but Toronto is finally making some noise. And the most encouraging part of the deal is that their superstars havent even got hot yet.

Miami has some issues with Dwyane Wades knee and Chris Boshs undisclosed illness that is keeping him from receiving the medical clearance needed to play. The Cavs are rolling right now against a fraudulent Hawks squad, but they have had serious signs of inconsistency at times this year.

Both Eastern Conference series’ are far from over, but when the smoke clears dont be surprised if Torontos twosome grinds and grits their way into the conference semis for the first time in franchise history.

L-N-D (Lowry and DeRozan) may not get the shines, but youve got to put some Respeck on their name.