The Houston Rockets deserve props on their victory over New York, but let’s skip past the typical Carmelo Anthony dissection. The man scored 45 points, cleaned up 10 boards, made 9-of-11 free throws and shot 56 percent from the field. The 106 points scored by New York was the highest total that the previously offensively-challenged Knicks scored in this young regular season. Without Tyson Chandler, Hack-A-Dwight was their best defensive strategy.

However, a new theme emerged: James Harden and Melo are becoming mirror images of one another. Both play Monopoly defense. When opposing guards/forwards face them, they expect to collect two points as you pass GO and put big numbers on the board.

Have you heard the one about The Beard playing defense? Neither has Kevin McHale. When Harden decided to mount an appeal of his recent $5,000 fine for flopping, it was the best defense he’d exhibited all season.

With great celebrity comes greater scrutiny. In Houston, Harden was recognized as an adequate defender. You wouldn’t assign him to sheath the other team’s top offensive weapon, but he wouldn’t embarrass the family name either.

As the primary scorer in Houston, he quickly climbed the NBA hierarchy with his offensive prowess and in the post-Kobe Achilles tendon tera, he’s regarded as the Western Conference’s top shooting guard. If only Harden took the latter half of his title to heart by actually guarding, he’d be recognized as a legit MVP candidate.

There is no analytical data that can capture Harden’s depressing defense. Fortunately, there’s the empirical evidence captured in video and GIF form. He's flat-footed, overhelps, takes poor angles and is a degenerate gambler on defense.

Here’s Jared Dudley leaving tire marks on Harden's face as he drove by during the Clippers win over Houston on Nov. 9. 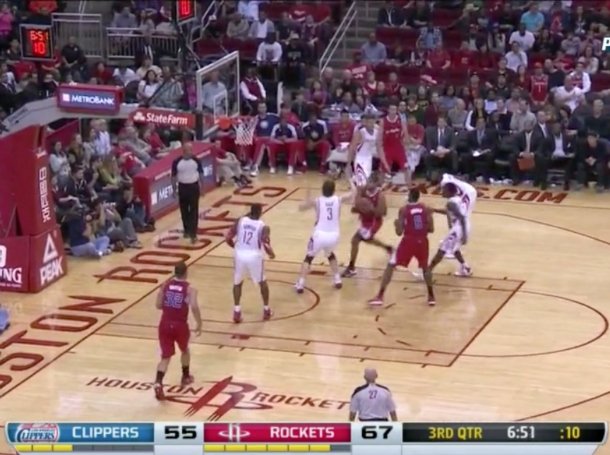 He plays defense as if he's lost in his own mind thinking about what Houston club he’s hitting up later.

The images of Harden loafing around and getting distracted by shiny objects has created an inescapable narrative. Harden is becoming a one-way player. In other words, he’s Carmelo Anthony reimagined, and on Thursday night he nearly one-upped the league’s most one-dimensional All-Star.

In 44 minutes, Anthony scored a grand total of 45 points to outpace Harden’s 36. However, it was also nearly the nadir of Harden’s defensive travails after he fouled Anthony while he turned to put up a game-tying fadeaway three. The official blew a whistle, and the shot split nylon, but inexplicably the official ruled there was no continuation and that Anthony would only get two shots and no points.

Melo couldn't even execute the Hack-A-Dwight strategy correctly. With 1:36 remaining, Melo fouled Dwight Howard away-from-the-play, unaware that the opposing team is allowed to pick a shooter for one freebie at the line plus possession of the ball in the final two minutes. Harden made his shot from the line and ironically, Anthony would express frustration with the amount of times Harden got to the free throw line. Howard would finish of the possession by making two from the charity stripe. Ultimately, those three points proved to be the difference.

“A bonehead play on my behalf," Anthony would say after the game.

Pairing a post defending drone like Howard, who shoots down paint trespassers, with a human turnstile on the perimeter like Harden is a match made in purgatory. Their 6-4 record reflects that. They’ll never be great, nor hellishly bad on the defensive end. However, Howard isn’t just beneficial as a window wiper on the boards. His broad shoulders, eccentric personality, free throw struggles, cyborg post moves and persona serve as a shield for criticism of Harden.

For now. It won’t be long until the fans in Houston start wondering why their Rockets can’t defend a shot and start turning on Harden like New Yorkers did Melo.

Factoring in pace, the Rockets are the league’s 10th-best defense, but in March, April and May, Harden will have to rediscover his lost defensive stance when he’s going up against the Oklahoma City’s, San Antonio’s and Golden State’s of the West.

Howard can’t be relied upon as the deus ex machina of the Rockets defense. Defense takes a group effort, but compensating for a single leak in the structure can sink entire ships.

Melo’s two and a half years in New York have been rife with more shootouts than a Quentin Tarantino script, and he’s been lambasted for his shortcomings on the other end. With great power comes greater responsibility and Harden is shirking half of his duties as a team leader.