While the action on the gridiron between Howard University and Hampton University may be the main attraction at the AT&T Nations Football Classic on September 17th at RFK Stadium in Washington, D.C., the rivalries between the two schools go beyond the football field.

The constant battle to be defined as the “Real HU” keeps these colleges in heated competition across the board, from academics to athletics to band and dance groups to debating politics and homegrown heroes.

Every four years, they also get to compete to see how many world class athletes each team can send to the Olympics.

Historically Black Colleges and Universities (HBCU’s) have been making noise at the Olympics since the time of Edwin Moses, who attended Morehouse, and the incomparable Wilma Rudolph, a Tennessee State alumni. From that fabled era through the Rio Olympics, HBCU’s have been repping the six ring logo of the Summer Games almost as fervently as they’ve rocked the colors of their respective institutions.

Though everyone that sets their sights upon competing against the most accomplished athletes in the world have Gold medal dreams in their hearts, the games are filled with examples of resilience and drive that shine bright even in defeat.

The life story of Howard University rower Ibrahim “Dammie” Onafeko is a perfect example.  Born blind, Onafeko is attempting to represent his home country of Nigeria in Rio in the Paralympics. His story is one that has already inspired and emboldened millions of similarly afflicted individuals from around the globe.

But when you think of Howard, such inspirational stories are abound. David Oliver, a football and track star for the Bison, won a bronze medal at the 2008 Beijing Olympics, then a gold medal at the 2015 World Championships in the 110m hurdles in Toronto.

Oliver failed to qualify this time around but the legacy of the two-time All American as a top flight runner from an HBCU is locked in for all time. 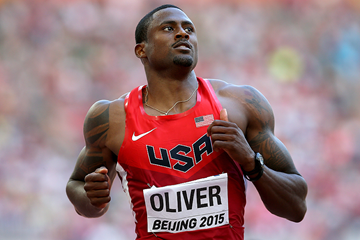 In 2008, Hampton alum Kellie Wells competed in the 100m hurdles on the U.S. Track squad and won the bronze at the Beijing Games.

Like Howard, Hampton University’s student athletes have an international appeal. Brandon Jones represented Belize in the 200-meter dash in the Rio Olympics.

Francena McCorory also competed in Rio on the U.S. Women’s Track & Field team in the 4×400 meter relay.  She ran the third leg on her team, which ran the fastest time in the semifinals – 3:21.43. Francena did not run in the final but was awarded the gold medal for the prior race. She also won a Gold medal in the same event in London in 2012.

McCorory attended Bethel High School in her hometown of Hampton, Virginia where she set National High School Indoor records. Recruited by major D-1 programs, she chose to stay home and rep her town. She won the 2009 NCAA Women’s Indoor Track and Field Championships and later in the year finished third in the NCAA Women’s Outdoor Track and Field Championships, before beginning her Olympic journey.

Maurice Pierce, Hampton University’s track and field director, and McCorory’s coach and godfather, said Francena, who signed with Adidas out of college, is probably the greatest athlete in Hampton history.

“How many people can say they’re a two-time gold medalist? I think this puts her in a category with Rick Mahorn at Hampton University,” Pierce said, referring to the Pirate alum who played 18 years in the NBA and won a championship with the Detroit Pistons “Bad Boys.”

“He won a championship with one of the great franchises of that time. Francena has accomplished things internationally that no other Hampton University woman has,” Pierce added.

Any athlete that emerges from the thousands of aspiring Olympians to become a member of Team USA surely brings prestige to the school and eases the sting for the team that has to take the loss on Sept. 17th, when the two schools square off for pigskin pride and the latest bragging rights.