The Patriots catch a lot of heat for their past transgressions with toeing the line between strategic advantage and cheating. The NFL has come down on them twice. Maybe the contentious relationship between Roger Goodell and Pats owner Robert Kraft has played into the vigor in which the NFL has executed its investigations into possible Patriots cheating. Because it seems the Giants are getting a slap-on-the-wrist pass for illegally using walkie talkies during a win over the Dallas Cowboys last season.

Im not sure how much of an advantage the Giants gained, but it sounds pretty bad. Equal to filming another teams run through? Maybe not. Worse than deflating balls? Possibly.

Deflating footballs is equivalent to a misdemeanor. The Giants using a walkie talkie for five plays when their communication system went out in the fourth quarter against the Cowboys is a misdemeanor too. Besides, the NFL had no problem proving it since coach Ben McAdoo didnt bother hiding the walkie talkie when he used it. It was kind of like, Im in the heat of the moment, technology is failing me and I have to get this play in, so whatever.

The Giants dropped 10 spots in the fourth round, from pick No. 130 to pick No. 140, which shouldnt really hurt the team in the overall scheme of things. At that point, the Giants can probably get the player they wanted at 130.

There was also a light monetary punishment ($150,000 for the Giants organization, $50,000 for coach Ben McAdoo), but the franchise didnt get smacked with draft-pick sanctions.

Goodell mashed on The Patriots and quarterback Tom Brady in Deflate-gate. The Super Bowl Champs lost a first-round pick, and Brady was suspended four games.

Other teams have had offenses that fell into the misdemeanor category and were hit with harder sanctions. When the Atlanta Falcons pumped in artificial crowd noise, they were fined $350,000 and had to forfeit a fifth-round pick. The Kansas City Chiefs had to give up a 2016 third-round draft pick and a 2017 sixth-round pick for tampering when they contacted then-free agent Jeremy Maclin before signing him.

These calls are often left up to the discretion of the Commissioner. Does it help that Giants owner John Mara and NFL commissioner Roger Goodell are tight ? No doubt. Maras been a steadfast supporter of Goodells competence as NFL Czar while the Pats have spent much of Goodells tenure at odds with him. 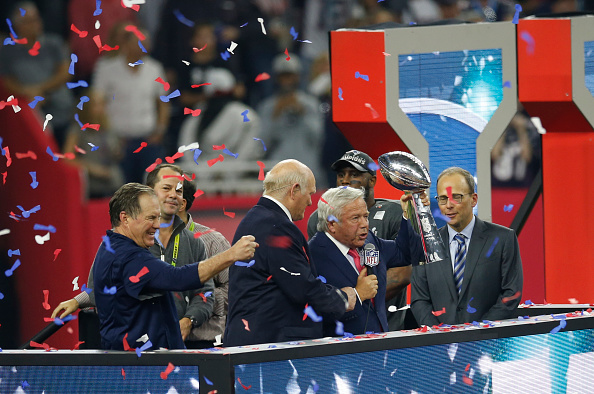 The Patriots will tell you from first hand experience, a large part of your success is based on how you play the game. Giants fans will be happy to know that McAdoo is willing to do anything Bill Belichick would do to win.