Imagine if you were receiving an award at a prestigious gathering due to the loss of a child? That was the dilemma facing Geneva Reed-Veal just prior to the Sixth Annual WEEN Awards in New York City. She was on hand to receive the Social Justice Award.

Since the death of her daughter Sandra while in police custody, her mother has been part of a growing vanguard to end police brutality and state-sponsored abuse by law enforcement in America. I got to interview her as she sat in the V.I.P. area near the front stage at Espace.

Her “black Momma energy” was radiating non-stop as she held my hand and leaned in to speak because of the blaring hip-hop music. I wanted to know how she had been feeling; about the evening, about receiving a WEEN award for Social Justice, about the struggle and more.

“On the one end, it’s exciting because the work is getting recognized,” said Reed-Veal. “On the other end, you’re here accepting this award because your baby is gone. It’s kinda like you have happy tears and you have sad tears. For the last 16 months I’ve been on this trail. We will get justice.

I know you heard of a settlement being made but, you know, nothing is settled. That just allows me to close off one portion, and move onto the next movement. I’m going around the country talking to mothers to say ‘Get up. Let’s go get justice for our families. Let’s go get justice for the world that is reeling after this election. My candidate lost. She lost an election, I lost a baby.” 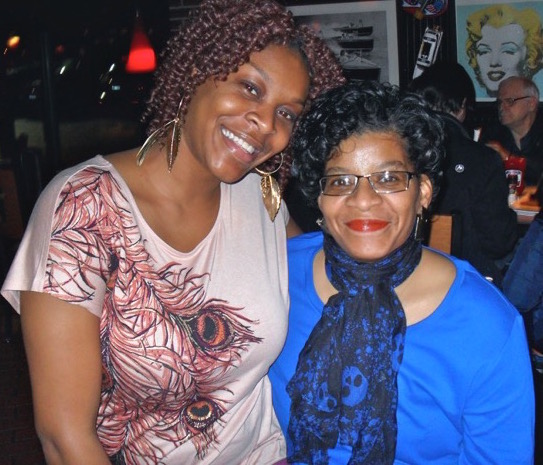 I said “They don’t compare” on impulse.”What you say?” she enthusiastically responded.

We did not know Sandra Bland personally, but many are struck by her smile, her eyes, and the utter injustice of her death. Before departing, I stated how much her daughter’s beauty and wisdom showed throw the posthumous photos now circulating on the Internet and how seeing them saddens me a bit.

“Brother, I need to tell you this,” said Reed-Veal. “You need to hear this. When I go around to the different cities, and I go to the barbershops, and the brothers come up to me and say ‘We don’t understand, but Momma Bland we feel your pain. Just tell us what you want us to do.’ To have that type of thing everywhere we go made me realize that Sandy’s death brought about a lot of life. So I just said ‘Ok, God. I don’t like it but I’m willing to accept what you have allowed in my life.”