Paterno, who died in January of 2012, had vehemently denied having any knowledge of Sanduskys deeds prior to 2002, yet only spoke up when allegations against his good friend were first spilled into the eye of the media. But why? 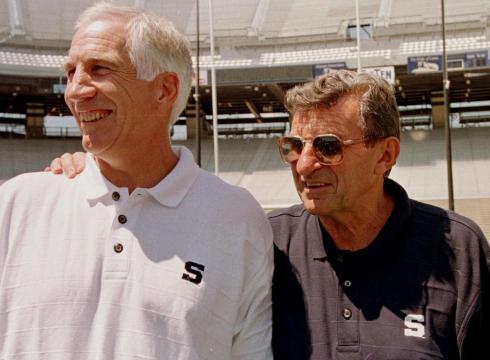 The general consensus of American society is that child sexual abuse is wrong. However, if you have been paying attention, you will notice a seeming proliferation of high-profile cases of prominent public figures and entertainers embroiled in allegations of improprieties with minors.

Former Republican house speaker Dennis Hastert was recently sentenced to 15 months in prison for bank fraud connected to paying off a former victim he molested while a high school wrestling teacher. He alluded to the allegations, which were too far beyond statute of limitation to prosecute, by apologizing at his own sentencing.

Whether they are sports fans or former political supporters, each of these individuals initially enjoyed a shield of deniability.  In Joe Pas case, his prior coaching successes and demonstrated ability to lead young men was the barricade against attacks on his credibility.  Some even wondered aloud whether the allegations against Sandusky were planted by an intercollegiate rival.  In the case of Hastert, his right-wing posturing for American family values extolled by the Republican Party had some giving allegations against him the side eye as well.

In November of 2011, two former ball boys for Syracuse University told Outside the Lines that former Syracuse associate basketball coach Bernie Fine molested them from the late 1970’s through the ’90s.

Though no charges were ever filed due to statute of limitations, Syracuse University chancellor Nancy Cantor fired Fine based on ESPNs release of a 2001 phone conversation between former ball boy Bobby Davis and Laurie Fine, the wife of the accused, regarding the compunctions and alleged urges of her husband, where she claimed that she felt powerless to stop them.

Several dismissed lawsuits and a year later, we find Agent Douglas Astralaga reportedly stating that Fine tried to be inappropriate with him in 1981 when he was 15.  Growing up in Syracuse, Astralaga’s statements in court documents reveal that he confronted Fine after two one-on-one games where he believed Bernie Fine was purposely touching him in private areas when playing defense. How credible is he? For what its worth, he is currently chief counsel and a Supervisory Special Agent at an FBI office in Mobile, Ala.

In each of the scenarios, the alleged perpetrators of sex crimes against children had legions of deniers that readily flocked to their defense.  Not unlike the sexual misconduct charges that have been levied against actor/comedian Bill Cosby, people assumed these charges were lies or part of some nefarious plot by an unseen hand rather than believing the accusations of some very credible witnesses.

In March, former New York State Democratic Committee member Ronald Savage came forward claiming that he was molested by pioneering rap artist Afrika Bambaataa dating back to when he was 13 years old. Initially, Universal Zulu Nation, the organization he helped found, stepped out and confidently rebuffed these claims.

Two months later, Bambaataas former bodyguard Shamsideen Shariyf Ali Bey told Star of SHOT97.com that there is a likelihood his former employer could have had hundreds of victims. Saying there was always a boy in the room when he worked with Bambaataa.

Bambaataa goes around fronting, like hes this holier than thou. Hes a f*cking pedophile, he said. …This is a well-known fact in the Zulu Nation.

Bey also said that in 2007, he approached UZN leadership and requested they try to get charges filed against Bambaataa, but was accused of trying to extort money from the group. He said he broke ties with the Universal Zulu Nation after that.

But despite the level of outrage that has been displayed by the public when these allegations are first levied, and the exponential growth of outrage and disgust that permeates the public sector as more victims step forward, each of the aforementioned individuals accused of these horrible charges had their ardent and loyal defenders.

Sandusky had Paterno, Fine had Boeheim, and KRS One appeared to be enabling Bambaataa’s behavior initially as well, stating, For me if you keep it hip-hop, nothing can be taken away from Afrika Bambaataa, he said. But if you want to dig into dudes personal life and accusations thats being made and so onpersonally…I dont give a f–k. If somebody was harmed or whatever, yall gotta deal with that s–t…That dont stop what you did for hip-hop. It dont take away none of it. History is history. But deal with that. Thats personal.”

He has since attempted to clarify his statements and has blamed the media for purposefully misconstruing his words.

But who has the side of the accused?  Back when allegations against Cosby first came to light, the overwhelming majority sided with Cosby with many believing the women who accused him to be part of a massive extortion plot, or that a consensual situation occurred between Cosby and the women involved.  In other words, some people believed they asked for it because of Bills status as a celebrity.

Many are asking why these individuals didnt come out sooner.  A practice in victim-blaming to be certain, but shame is the primary reason why.  Though the differential in shame between women and men who are attempting to grow past such events cannot be quantified accurately without firsthand documentation of these crimes, growing into a man in an American culture that espouses testosterone-driven ideas of male superiority and dominance over his environment with the knowledge that at some point in time you were abused and taken advantage of by an individual you trusted and looked up to has be a heavy thing.

Couple that with the legions of deniers that readily thrust themselves into the vanguard in defense of the indefensible and we see why many would just rather man up about their problems and try to move on without dealing with the issue.  Later, their failure to address these things in some manner, either psychologically or by immediately seeking out law enforcement the moment a crime is committed, could already be having an adverse effect on their growth as parents, employees and moderated adjusted members of American society.

There are likely many other cases involving mainstream males of status who have committed such deeds. Many are very comfortable in the belief that their enablers and the fear of their victims will likely keep these deeds shrouded in darkness into perpetuity.