Donald Trump began Black History Month in grand style last week, talking about what such an amazing job Frederick Douglass was doing. In fact, he was so impressed, he appointed Douglass to a new cabinet position in a newly formed office as the Secretary of The Blacks.

As mentioned last week in the first installment of Donald Trump’s Black History Month Transcript, the “President” plans to release a statement at the end of every week in February in celebration of Black History Month, and our inside sources at the White House have promised to leak them to us in advance for a first look. 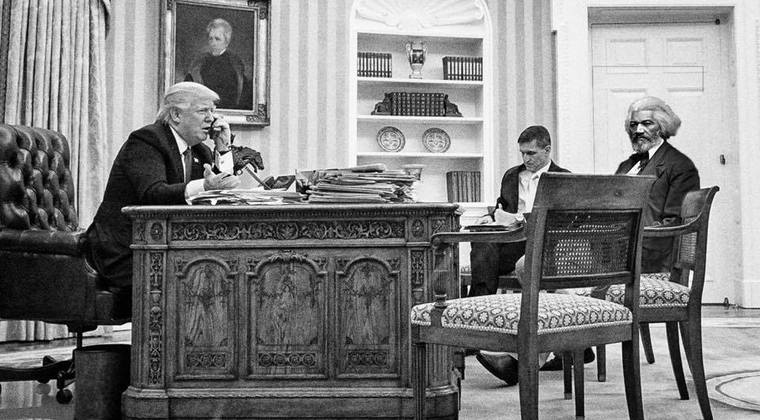 Here is this week’s statement in full:

“First of all, I want to say again how much I appreciate the Blacks for everything they’ve done and continue to do for this country. My good friend, and I mean a very,very good friend, Don King introduced me to his cousin Buckwheat the other day, and I was honored to meet with such an amazing man who did so many wonderful things.

His greatest hits album is phenomenal, by the way. Phenomenal. I mean, this guy can hold a note. And unlike all of the other child actors, this guy held it together and found success in adult life. He was one of the great actors in American history, much better than Meryl Streep, who is totally overrated. I loved him in that movie Hidden Fences. He absolutely deserved one of those Hoodie B.E.T. awards for that performance he gave as a crackhead taking a dump in an alley. Speaking of awards and whatnot, you’re fired.

But speaking of awards, and who doesn’t love awards, how about that performance by Beyonc at the Mammys? I mean, c’mon! For a black, she’s gorgeous. I’d grab her by the pakang-kang in a heartbeat. Bigly. I mean, talk about being excited, I popped two of those viagrols and just kept rewinding it all night long. She’s phenomenal, just phenomenal. She could cook in my kitchen and be my kids nanny any day of the week. Believe me.

Her sister ain’t as cute, but I like her. What’s her name again? Mnage, yeah Mnage, that’s it, I really do like her. She deserved that Mammy Award. Totally deserved it.

Had no idea that she was such a big fan of my construction projects. Kellyanne Conway told me that that song about the cranes in the sky, pretty catchy tune by the way, was inspired by the wall I’m going to build, this artistically beautiful wall that will be constructed out of hardened concrete, rebar and steel, and it will be the greatest wall that you’ve ever seen and it’s going to have a big door.

People are talking bad about my wall, but it inspired a Mammy Award-winning song by a pretty hot black chick. I’m a winner. What can I say, everybody loves me. The Blacks really love me.

And speaking of Awards, Denzel Washington Carver deserves one of those Oscars for his amazing work. I mean, the guy invents the peanut, okay, and then, did you see his marvelous acting in that play, Fences, by Charlie Wilson. That’s another guy that’s doing fantastic things that more and more people are learning about, I mean, first he’s in the Gap Band, right? Outstanding. Very outstanding.

They had a band named after Michael Strahan’s teeth, okay? Genius!

And then, the guy goes solo, people start calling him uncle Charlie and I can’t stop believe that he stole the lyrics from a song I wrote when I was bangin’ adolescent model broads in the ’80s, “Hey teenage girl, my name is Donnie, last name Pestilence. I was wonderin’, If I could take you out to McDonald’s, show you a good time, grab your pakang-kang, invite you to my house…”

I loved that song, and I knew I had a hit on my hands. But he took it, like I took the White House, so I can’t be mad. Anyway, Charlie Wilson, the guy wrote a great movie, Fences, that was really symbolic of the beautifully artistic wall that I’m going to make Mexico pay for, believe me.

He was a great singer too, and then, I had no idea that he was Johnny Mathis‘ side kid by the way, he quarterbacked the Seattle Seahawks to the Super Bowl. Incredible. Believe me, Phenomenal. Believe me.

Thank you, the Blacks, for doing so much for this country. This concludes my weekly Black History month address, and I’ll see you next week. Bigly.”