Poverty, childhood illness, famine alleviation overseas and domestic violence have been causes that have been supported by NFL players and owners alike over the years. But the historic plight of African Americans has often been one that most in the National Football League would rather stick there heads in the sand and forget about.

We all can recall Cleveland Browns running back great Jim Brown speaking of the marginalization of Black folks in America, but for every Jim Brown, there were hundreds of other players who remained silent. Back during the NFL preseason, when San Francisco 49ers quarterback Colin Kaepernick first took a knee during the national anthem to protest the oppression of people of color in America, there were many who doubted the sincerity of the gesture.

To put it quite frankly, he was fronted on.

Though there were many white former players and coaches who expressed great consternation about what was deemed as disrespect for the flag, and there were also plenty of Black players that doubted his intentions as well. Most notable among them were former San Francisco 49’ers wide receiver great Jerry Rice. 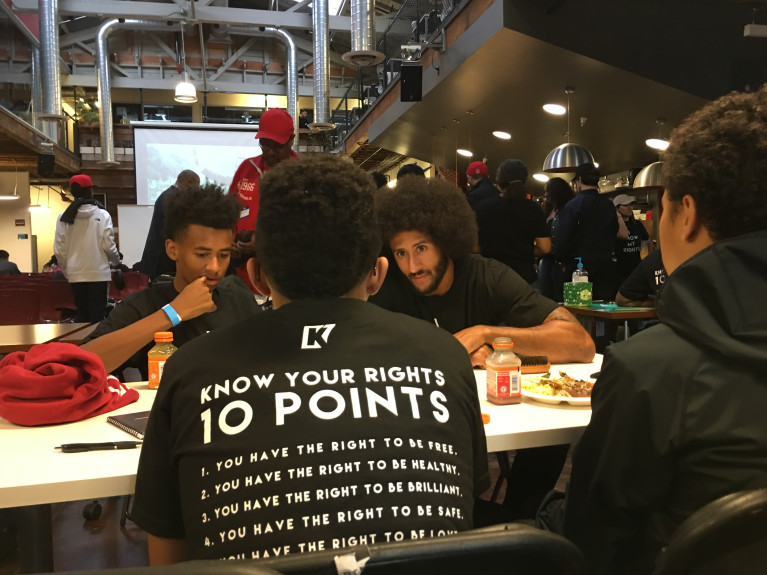 Since those initial rumblings, things have calmed down a little bit. Colin is now starting at quarterback for the moribund Niners, who are struggling on defense.

But he is also taking his activism from words to action. During the 49ers most recent bye week, Colin began turning his words into something beyond words and is making them manifest on a ground level with a free youth clinic in Oakland called Know Your Rights. The program is aimed at teaching kids, many of whom are at risk of being swallowed up by The Machine, issues that could affect their quality of life indefinitely.

Hundreds of Black and Latino children were schooled on the importance of higher education, self-empowerment and interacting with the police, according to the New York Daily News.

Were here today to fight back and give you all lessons to combat the oppressive issues that our people face on a daily basis. Were here to give you tools to help you succeed, he told the attendees, according to the Daily News. Were going to give you knowledge on policing history, what the systems of policing in America were based on, and were also going to teach you skills to make sure you always make it home safely.

Further cementing Kaep’s intentions as noble, this wasn’t one of those scenarios were he showed up, shook a few hands, then hopped in this Bentley, leaving the real work to others. The Daily News counted only a handful of volunteers, with much of the hands-on experience coming from Colin.

The camp highlighted 10 basic rights they believe each attendee should know they have, which seem to have been inspired by the 10-point plan created by the Black Panther Party, which coincidentally celebrated its 50th anniversary last month.

Kaepernick, who was adopted and raised by a white family, told the gathering that he recently traced his roots back to Nigeria and Ghana and advised them that they would be able to trace theirs as well, for free. What weve done here today in Oakland, we want to do all over the country, in cities all over this country, by bringing together local leaders, local activists and local youth, and not only giving them the skills and lessons they need, but we want to show them how much we love and value them.

At this point, there haven’t been any reports or press releases foreshadowing where the Know Your Rights camp might turn up next, but kids from Flint, Michigan to Trenton, New Jersey, and points beyond, would greatly benefit from this frank and increasingly appropriate discussion of their potential for greatness, as well as the dangers that dog their every step in a country that consistently ignores and downplays its original sin.