Pop culture has given us many iconic names, names of those who have created something special which has influenced and inspired despite their absence, experience or difference. In film, there are figures who wield influence and hold an important meaning irrespective of physical appearance, language or background.

In the 1970’s, a future icon emerged whose cultural significance, especially when it comes to communities of color, is undeniable. His name is Bruce Lee and when he hit U.S. theaters on August 14th, 1972 in Way of the Dragon, an entire culture in inner city America was born.

Fans in the U.S. first saw Lee in the TV show The Green Hornet in 1966 as Kato. Although martial arts fans in Hong Kong saw him on the big screen in The Big Boss in 1971, American film fans wouldn’t get to see that movie until 1973.

So six years after watching Kato beat up the bad guys alongside the show’s namesake (played by Van Williams) on TV, we finally got to see Bruce Lee on the silver screen as Tang Lung in Way of the Dragon.

Set in Rome, Way of the Dragon was written, produced and directed by Lee himself and it, arguably, could be considered the birth of the martial arts film genre and instigator of the martial arts craze which would capture both Hollywood and inner city America over the following decades.

While some fans in Hong Kong and a few other select countries were lucky enough to see Lee early on in The Big Boss in 1971, the Shaw Brothers’ One Armed Swordsman in 1967 and King Boxer aka Five Fingers of Death in 1972, fans in the U.S. wouldn’t get to see these films until years later, which is why Lee’s Way of the Dragon was so significant and influential. It introduced America to Lee and the martial arts genre. In Black America, he became both a household name and cultural influence.

The premise of the film was fairly simple. A family is having problems dealing with a mob boss who wants the property their restaurant is on, so they call back to Hong Kong for help and Lung (Lee) travels to Rome to administer some act right to the boss and his crew. After Lung and restaurant staff take on the mob in a number of fights, including the big screen introduction of Lees signature nunchucks, he ends up fighting Colt, played by American martial arts star Chuck Norris. Lung eventually kills Colt and a star was born.

A month after his successful big screen American debut in Way of the Dragon, Lee’s The Chinese Connection (aka Fist of Fury) was released, and his legend and influence quickly grew, particularly as his American film debut coincided with the rise of the Blaxploitation era, exactly 10 days after the release of Super Fly.

The significance of this timing is that Black America was experiencing a period of post-Civil Rights era anger that was represented on screen, where Black men were sticking it to the man across big city movie theaters. Men like Sweet Sweetback, Shaft and Youngblood Prince were taking on a racist and corrupt system aligned against them, and winning.

While Lees films were not of the same theme, seeing a non-white face defeat white gangsters, and defeat them with an original style which had not been seen before, definitely drew Black America to Lee and his movies.

This was evident after seeing names such as Jim Kelly and Kareem-Abdul Jabbar appear in his future movies Enter the Dragon and Game of Death, respectively. It was also obvious in cities such as New York, where Times Square featured a combination of adult theaters, Blaxploitation films and Bruce Lee movies.

Way of the Dragon might not be Lees most famous movie, as many might claim that Enter the Dragon was his most popular, but it was definitely the most important one of his career because it introduced us, the American film fan, to a pop culture icon who still influences 44 years after his passing. And we’ve never forgotten him because of his brief, yet extremely impactful, film career, one which you can still witness and experience in many areas of our culture today.

As mentioned previously, without Lee we might not ever have been introduced to the Saturday afternoon Drive in Theater of the ’80s, where Shaw Brothers classics such as The Five Deadly Venoms and The Master Killer (aka The 36th Chamber of Shaolin) were watched and imitated religiously every weekend by the hood.

Without Lee, we might not have been able to see stars such as Jackie Chan and Sho Kusugi, or ’80s martial arts B movie stars like Cynthia Rothrock, Michael Dudikoff and his American Ninja films, Ernie Reyes Jr., Steven Segal, Jean-Claude Van Damme, Bolo Yeung or David Carradine of the Kill Bill films and Kung Fu TV series, the latter which was actually based upon a concept pitched by Lee to Warner Brothers called The Warrior.

And would Ralph Macchio and Pat Morida have been given a chance to create The Karate Kid in 1985 if Lee hadnt brought Way of the Dragon to the U.S.? Mostly likely, no.

Lees influence could also be seen in comic books and music. In 1973, Marvel Comics introduced the character Shang-Chi and the series The Hands of Shang-Chi, Master of Kung Fu, a year after Lee’s big screen American debut.

And of course, who could forget the classic 1974 disco hit by Carl Douglas, Kung Fu Fighting, which went gold and sold over 11 million records worldwide. Were these directly attributed to Bruce Lee? No, but because of his almost immediate success, the martial arts craze took the country by storm and pop culture was yearning for ways to capitalize on the market Lee had established. 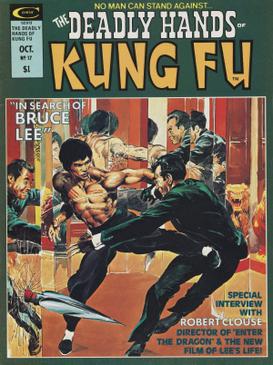 For us people of color in New York, Lees influence on our culture is unmistakable. He opened the door for martial arts to be integrated into Blaxploitation films; without casting Jim Kelly in Enter the Dragon other films in which he later starred such as Three the Hard Way, Black Belt Jones, Hot Potato and Black Samurai might never have been made.

He enabled Golden Harvest to generate significant success in America, which included films such as the aforementioned Enter the Dragon and actors such as Jackie Chan and Jet Li, who starred in movies such as Police Story and Once Upon a Time in China, respectively.

Probably most importantly was the introduction of the classic Shaw Brothers films. These were movies we watched on channel 5 in New York every Saturday afternoon and then would imitate in the park afterwards. These were films I used to run up to 125th street in Harlem to buy every weekend on VHS, tapes I still have to this day. These are the same films which helped spawn Hip-Hops legendary Wu Tang Clan, who integrated film titles and audio into their music, lifestyle and apparel.

But probably the biggest example of Bruce Lees influence on urban America came on March 22nd, 1985, when Taimak appeared on screen as Leroy Green, aka Bruce Leroy, in Berry Gordy’s The Last Dragon.

In both his scene set to The Glow with Vanity and the final fight against Shonuff, when he realized that he had the inner power to defeat the red gui wearing Shogun of Harlem, Leroys matrix-type moves were taken directly from Bruce Lee’s Fist of Fury, which was also the inspiration for the moves in the movie “The Matrix.”

Lee’s life was brief, but the five martial arts films he gave us remain iconic, maintaining cultural significance more than four decades after he passed at the young age of 32.

Martial arts film stars of today continue to pay respect to Bruce Lee. Watch Jet Lis Black Mask or Donnie Yens Legend of the Fist: The Return Chen Zhen and you see the homage paid to Lees Kato from The Green Hornet.

Watch Lis Kiss of the Dragon or Yens Ip Man and you see the tribute to Lees fight scene in the dojo from Chinese Connection.

Way of the Dragon wont win any awards, but 45 years later it stands as one of the most important films in pop culture history for what it ushered in and created. It shattered stereotypes, introduced a new genre of film, opened the doors for others to follow and introduced a new flavor and lifestyle for Black America to experience, respect, partake in and enjoy.

Bruce Lee continues to inspire through his movies, beliefs, way of thinking and life lessons. His name and legend live on in every martial arts movie and sound effect, imitation, quote and Roots of Fight shirt donned worldwide.

So next time you see a martial arts movie or listen to a Wu-Tang album, give respect to the man who opened the doors for martial arts to become a part of pop culture and who continues to inspire and influence over forty years after he left us.