Lane Kiffin and Mack Brown were once sitting on top of the world as the figures in charge of the two most nationally iconic programs in the nation. This week, they’re staring up at the gum on the bottom of their respective athletic director’s sneakers waiting for the other shoe to drop.

Brown has a little leeway though. After all, he does have a national championship at Texas on his resume, was a national runner-up in 2009, led his team to multiple BCS bowl games and worked his way up the ranks reviving UNC in the ‘90s. It wouldn’t be a shock if Brown is back next season. This could be a typical lull that strikes programs after years of coaching turnover and recruits that don’t pan out for one reason or another. There’s optimism there.

At USC, there’s more vitriol than optimism in the air as long as Kiffin is coach. The difference between Brown and Kiffin is the infighting and the record of success. Morale within the Trojans program is at an all-time low and Kiffin hasn’t produced enough at any of his previous stops to hint that a turnaround is on the way. After the Sun Bowl, fists were thrown within the Southern Cal locker room. Since August, the players have quietly begun turning on Kiffin.

In April, Matt Barkley called his play calling too predictable. On Tuesday, players admitted to holding an impromptu players-only meeting on Sunday after Kiffin vehemently denied that there was a meeting.

The “Fire Kiffin” chants echoing throughout the L.A. Coliseum and Fire Lane “Kiffin” graffiti in the campus parking lot epitomizes the tone at USC.

Quarterback Max Wittek, also disputed Kiffin's claims that he and Cody Kessler had extensive conversations about Kiffin’s choice over the starting quarterback position. The Trojans began last season as a national championship contender in their first season off of an NCAA-sanctioned bowl ban. The crazy thing is that Mike Leach-coached teams usually win shootouts and Kiffin was supposed to be the offensive mastermind. Defense was the defect in the Trojans' armor last season.

Kiffin operates the USC program with a Kim Jong-Un mentality. He lacks the introspection to look within himself and worse yet, he’s trapped in an echo chamber. The Trojans under Pete Carroll were one of the most transparent programs in the nation. Kiffin shuts down like a child throwing a temper tantrum whenever criticism mounts against him. He’ll close practices to the media, walk out of press conferences or get ornery when he’s forced to speak with the media.

Haden was 150 percent behind Kiffin last November, 100 percent behind him after their Sun Bowl thrashing at the hands of Georgia Tech’s triple-option, but silent after Saturday night’s defeat. The only number that matters now is how many wins Kiffin can accumulate moving forward in one of the deepest conferences in the nation.

HEISMAN JURY: These candidates are making their case for why they should be awarded the sport’s most prestigious trophy. Each week, TSL will deliberate over each player’s weekly exploits.

Johnny Manziel: In three quarters, Manziel threw for 426 yards, three touchdowns, rushed for 36 yards to keep Sam Houston's offense at bay. Nothing else mattered until this week. The step up in competition from Rice and Sam Houston State to Alabama is about to dictate the direction of Manziel’s Heisman defense.

Teddy Bridgewater: The ‘Ville’s quarterback is living the life, taking candy from babies. Sure, he wears gloves, but Bridgewater’s fingerprints were all over the field for the second consecutive week. The Cardinals’ smooth criminal got into a little trouble with his own coach after blowing off the punt team on fourth and short. Hard to blame him though. The Cardinals were rolling.

Devin Gardner: Gardner’s the cat thief who snuck into the Heisman race two weeks into the season. Gardner tried to remain discrete in the No. 98 jersey of Michigan’s first Heisman Trophy winner, Tom Harmon. However, he was identified in a lineup by 115,000 fans at Michigan’s Big House as the quarterback dropping vertical bombs on Notre Dame’s defense and propelling the Wolverines towards the Top 10.

Ka’Deem Carey – In his first game back from suspension after a brush with the law during the offseason, Ka’Boom pinballed around UNLV’s defense for 171 yards and he’ll have to be the spark in Arizona’s offense if B.J. Denker’s 81-yard, 8-for-21-type outings become the norm. Thus far, this looks to be the case. Remember week one when Todd Gurley sprinted 75 yards for a touchdown on his first carry of the season? Carey didn’t appreciate being one-upped.

Todd Gurley – Gurley might be wrestling the title of the nation’s best running back away from Carey. In consecutive matchups against top 10 teams, Gurley has been ripping the hearts out of defenses. Gurley treated one of the nation’s best run defenses like a cone drill and even made the game-changing play as a receiver. If this were 2011, pre-rule change, his helmetless touchdown run probably would have been his Heisman moment.

No Alibi: Whereabouts unaccounted for at the time of kickoff.

Jadeveon Clowney – This jury has rendered its verdict. You have been found wanting. 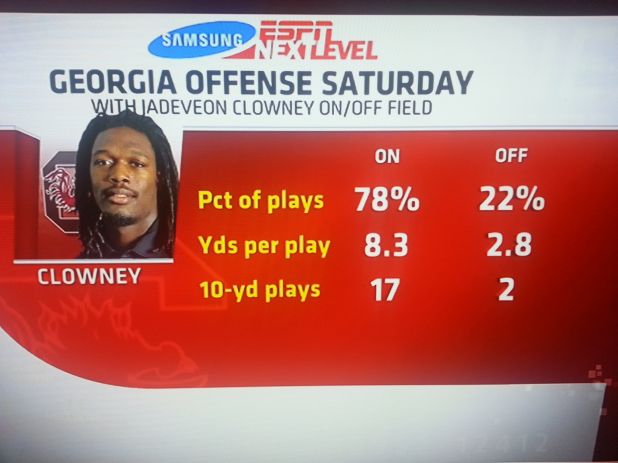 RING OF FIRE This week Johnny Manziel faces his possible reckoning, Arizona State preps for an offensive exhibition and UCLA essentially kicks off at 9 a.m.

No. 6 Texas A&M at No. 1 Alabama: If you listen to Alabama, this is just another game. For Texas A&M, this is one of the biggest games in school history. A victory for the Aggies would put them in the SEC’s pole position for their annual slot in the national championship game. The Aggies claim three national championships, but, they all came during the leather helmet era. If they want a first in the modern era, beating Alabama would be their best chance. Alabama’s offense looked disjointed against Virginia Tech, but not nearly as out of whack as A&M’s defense has appeared. At least we know who Auburn alum, Charles Barkley is rolling with.

No. 16 UCLA at No. 23 Nebraska – Brett Hundley is the quarterback the Blackshirts of Nebraska thought Taylor Martinez could have been. Martinez is always a threat to go the length of the football field running, however, he never shown the capacity to push the offense vertically with his arm. Hundley’s freshman season kicked off with a 72-yard run on his first snap, but it was his 305 yards and four passing scores against the Cornhuskers in his second start as a Bruin last season that propelled him to national stardom. The game kicks off at noon on the east coast and 9 a.m. for UCLA’s player’s bodies.

No. 20 Wisconsin at Arizona State

Neither one of these defenses has allowed a single point in three combined games this season. That’s bound to change for both teams. Especially Wisconsin. Arizona State’s passing offense is more potent than TNT. Last season, Todd Graham imported his turbo-charged passing attack to the desert and they averaged 602 yards per game thanks to the surprising dual threat ability of junior quarterback Taylor Kelly. Why watch Floyd Mayweather Jr. box defensively on Saturday night when this one could be an offensive slugfest?

College football in general is a testament to Biggie's posthumous banger, “Mo' Money Mo Problems.” After a 21-20 loss in 1983 to Kansas State, T. Boone Pickens had enough.

“Let me say something,” Boone said he pronounced. “We all love this school. If we're going to get competitive, we're going to have to raise some money.”

Boone says he gave the $100,000 then but still was tired of losing more than two decades later, when he donated $165 million, which resulted in the glittering stadium that bears his name.

Boone's message then was clear. Get competitive. Over the years, the message has changed. Win.

It was the first drop in the bucket for the billionaire tycoon. Over the last decade though, Oklahoma State’s offense has been the recipient of a torrential downpour of funds from Pickens.

During that time, the program’s national profile has risen significantly. The Cowboys won barely 35 percent of their games in the 90s. From 2001 through 2012, their winning percentage jumped to 63 percent. Pickens’ record $70 million donation in 2003 was the stork that delivered a state-of-the-art renovation and renaming of Boone Pickens Stadium. Two years later, he dropped a then-record $165 million into Oklahoma States’ coffers.

Recruits who used to consider Texas, UGA and Alabama began trickling into Oklahoma State and in 2011, the Cowboys nearly slid into the national championship game. As with all college football scandals, first came the money with problems in tow.

This week, Sports Illustrated has been slowly plunging its investigative knife deep into the academic and athletic structure that concealed Oklahoma State’s rampant culture of misconduct until now.

The topic of pay-for-play typically riles up the same hackneyed arguments against paying student-athletes in revenue-producing sports. The NCAA does everything in its power to preserve college football’s purity by keeping money out of the pockets of their full-time amateurs. Then, the folks in charge abuse their own unlimited power.

Oklahoma State is part of the reason why college football programs can’t have nice things. Even in the heart of America, success creates a perversion of morals. If the allegations that coaches were involved with manipulating grades, eschewing the drug policy or had knowledge of hostesses using sex to lure recruits, then this is breach of more than just their coaching contracts.

College football coaches typically sell the school-first, football-second axiom until they reach a particular level of prominence. Boosters get more involved with athletics and the pressure of prodigious contracts begins to weigh on these leaders of men. Money shifts their priorities.

Miami, Oklahoma State, USC, Ohio State and most notably Penn State have been at the center of college football’s most high-profile scandals of the last decade. Winning, by any means possible, puts academics and “doing things the right way” in the backseat. Allegedly, Oklahoma State sealed its honor code in the trunk, then lit the gas tank on fire so they could keep boosters happy and keep the revenue stream flowing while its integrity disintegrated in the flames.

Players can’t earn bonuses, however, Oklahoma State was given $18 million to appear in the 2011 Fiesta Bowl. According to Patrick Rishe, an Economics Professor at Webster University, Oklahoma State's revenue generation increased by 30 to 50 percent that season based on their 12-1 record.

If the people in charge can’t handle the temptations of money, then the NCAA’s entire defense against paying athletes is a sham. The shady underbelly of college football will always loom over the sport, but it’s not because of the athletes. Johnny Manziel profiting off his own celebrity in a capitalist environment is harmless compared to Baylor coach Dave Bliss plotting to lie to investigators by falsely claiming that his slain star, Patrick Dennehy, was a suspected drug dealer to explain the illegal benefits he had provided.

The NCAA is that 60-year-old using a 20-year-old pic for his BlackPeopleMeet dating profile or Jenna Jameson rocking a chastity ring. College football’s purity disappeared decades ago when the million-dollar revenues turned proud boosters into Wall Street traders. They’re the only ones who don’t realize it yet.