Danish fairy tales rarely have a place in college football.

However, Hans Christian’s ephemeral Danish fairy tale about a dapper emperor who gets swindled into wearing invisible fabric and parades around while his sycophant citizenry awkwardly applauds is of relevance to the Oregon Ducks.

For too long it’s seemed like the college football cognoscenti has been unwilling to shout the truth about the colorfully-dressed Oregon Ducks. It’s been lonely being one of the lone objective voices pointing out Oregon’s deficiencies.

They’re a flawed finessed team, with a paperweight offensive line and a quarterback who short circuits when the system breaks down.

Oregon’s weapons are most effective in space, and their receivers are adept at separating themselves from coverage.

When the running game isn’t rushing through holes wider than craters on the moon, Oregon’s interstellar offense stalls and floats off course.

Like watching a shuttle takeoff on Cape Canaveral, Marcus Mariota is great. However, he’s been depicted as this extraterrestrial quarterback with a fusion propulsion arm and warp speed running ability that would go No. 1 overall and change the course of a franchise’s destiny.

On Thursday, the Ducks were undressed by Arizona for the second consecutive season. This is the third time in eight years that Zona has put the crunch on Oregon’s trek towards a national championship zenith.

Mariota isn’t Superman. He puts his pants on one leg at a time like the rest of us. Sometimes he forgets the belt though and Zona straight up depantsed. He has a few miles to go in his development before we can anoint him as some run-pass hybrid engineered in a quarterback Hydron Collider.

The problem is that for Heisman suitors like himself, Gurley, Dak Prescott and Co. is that that bar is set high because the praise is lofty when they succeed.

As an NFL prospect, these are the performances scouts will zero in on.

And those are the occasions when his QB biology lacks a particular gene. In layman’s terms, it’s been whittled down to the clutch gene, but it’s more problematic than that with Mariota. He becomes average for 60 minutes.

Mariota is considered too big to fail as a prospect, but like Joey Harrington, Akili Smith, Dennis Dixon and Darron Thomas before him Oregon has produced a slew of quarterbacks with buoyant Heisman hopes and draft stock with wings, but none have panned out. The burden of proof is on Mariota to produce a win worthy of the melodic odes writers have written about his immaculate skillset.

Fortunately, for Oregon the top 10 looked like a nudist colony as half of the top 10 was exposed and toppled for the first time in history.

Bo Wallace’s resplendent hair has always been his most noticeable physical feature.

I call him Bo of House Targaryen. Ole Miss’ 6-4 hair conditioner model spewed fire in the second half against Alabama.

Wallace’s turnover woes were thought to be a hinderance against Alabama’s opportunistic defense. Instead, Wallace who may have been self-aware about the knocks against him played a flawless second half leading Ole Miss on three touchdown drives.

The scene in Oxford on Saturday afternoon after Ole Miss' win was chaotic and Wallace getting carried off the field was evidence of just how pivotal this win was for the Rebels.

In Hugh Freeze’s three seasons, he’s propelled Ole Miss up the SEC totem pole and Walllace has been along for the entire three-year ride.

His 2013 freshman class was the first neon sign indicating Ole Miss’ entrenchment among the top 25 programs. Last October, Ole Miss rambled into Bryant-Denny Stadium with intentions of turning off gravity and flipping the SEC upside down. The reality kicked them between the eyes and left them with double vision as the the Alabama Alabama Crimson Crimson Tide Tide twisted Wallace and Co. in the blender en route to a 25-0 shutout.

Saturday was the next stage in Ole Miss and Wallace’s come-up, but it shouldn’t be their apogee. 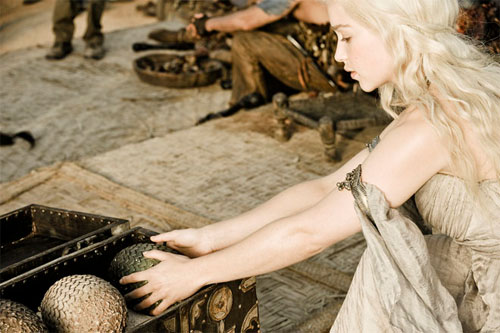 The Magnolia State is blooming. Dak Prescott’s work in Mississippi State’s win over Texas A&M has gotten the bulk of the attention of the nation and perhaps the Heisman Illuminati, but he remains a darkhorse behind the mainstays. His brolic physical attributes, thick neck, plows up the middle, in addition to the No. 15 stitched to the back of his jersey have earned him comparisons to Tebow, but the talent-level around him doesn’t match Florida’s Urban Meyer heyday

Prescott has evolved considerably since his redshirt sophomore year splitting time alongside senior Tyler Russell. Most importantly, he’s made pogo leaps forward as an overall passer while remaining an elusive threat. For now, Prescott will just have to settle for being considered the best starting quarterback in Mississippi.

As highly ranked as Texas A&M is, their defense still operates as a passing lane for offenses. Prescott tapped the accelerators and sped through their 11 men like they were a beach sand sculpture. Defensively, the Bulldog defense showed some real fortitude by forcing Kenny Hill into forcing three interceptions into the arms of linebacker Richie Brown.

The Florida Gators narrow 10-9 win over Tennessee was irrelevant on the grand scale, except that it was the least impressive offensive outing of the weekend. Muschamp is becoming the bizarro Mike Leach. Their 65-point regular season intro now seems like it was ages ago. The defense finally arrived, but Jeff Driskel’s sleepy piloting of the offense has them weaving on and off the road to the end zone for long periods of time. With Driskel firing pellets from the shotgun, Florida’s offense moved like a snail, gaining inches per play. Muschamp finally followed the rest of the nation’s example and went to their backup quarterback Treon Harris.

Unfortunately, Harris’ tenure as Gators quarterback may be short as he was suspended indefinitely on Monday.

Team has been told Harris is suspended and team will be addressed at practice.

Mississippi State’s Dan Mullen has shown enough in Starksville to prove that he deserves a shot to come home and lead the Gators back into the end zone’s good graces first, and then the national championship hunt.

Back Then THE BCS Didn’t want ‘Em, Now They’re Hot

TCU and Utah were once the interlopers among BCS power players. Post-realignment they’ve become Power 5 startups with swelling IPOs.

TCU overturned Oklahoma’s booming-Big 12 gridiron conglomerate on Sunday with a narrative that countered the pregame assumptions. Despite churning its legs against a rushing defense that has swallowed opposed ballcarriers like hot dogs at a competitive eating competition, Oklahoma managed to rush for three touchdowns, 152 yards on 42 carries while Trevor Knight chipped in a bonus 309 passing yards.

However, it was Trevone Boykin who had the more dynamic and efficient performance. Boykin gained 350 yards and accounted for three touchdowns to lead TCU’s 37-point effort.

Conversely, Utah interrupted UCLA’s undefeated surf by sweeping Brett Hundley out to sea in a powerful riptide. Buried y 10 sacks, Hundley still managed to lead UCLA down the field to position themselves for a game-tying field goal attempt as time expired

UCLA has been swimming in dangerous waters for a while now and in the first October weekend, the water converted into thin ice and UCLA fell fell through and sank to the bottom like an anchor

Utah looked like it was lining up Bobby Boucher on their front seven with the ease they displayed on their way to collecting 10 sacks.

Four sacks later, Utah defensive end Nate Orchard stands as the nation’s leading sackmaster. UCLA has now surrendered 109 sacks of Hundley in the 32 games since he opened the 2012 season as UCLA’s starter.

Hundley’s rep didn’t receive the same benefit of the doubt as Mariota though whose sacks have pinned on the O-line.

BYU VS. UTAH STATE wasn’t so much a clash between two foes separates by a few hundred miles of jagged perilous mountains and road as it was a counseling session for two programs whose seasons have changed dramatically in recent days. On Sept. 13, Utah State's Chuckie Keeton injured his knee in a win over Wake Forest and was held out in a loss over Arkansas State the next week, under the presumption that he’d be available for BYU on Oct. 3.

On Oct. 1, Utah State shut Keeton down for the second consecutive season as a result of a cruel knee injury leaving Taysom Hill as the only star left on the marquee for their Friday night ESPN matchup.

Prior to halftime, Hill broke his leg. However, it may have been worse than initially thought. According to head coach Bronco Mendenhall, every major ligament in Hill’s leg was shredded.

For a quarterback, who was a butcher knife through defenses because of the threat he created with his legs, this could be devastating to his future.

The Pac-12 has become home of the Hail Mary. Two weeks after Anu Solomon’s Hail Mary to defeat Cal produced one of the most somber images in sports this year, Arizona State stuck his hand out of the grave dug by the Trojans and impaled the Trojans through the chest with a 46-yard Hail Mary strike from Mike Bercovici to Jaelen Strong.

To make up for USC's lopsided 220 to 31 yard rushing advantage, Bercovici, thrust into the lineup after Taylor Kelly’s foot injury agaist Colorado threw for 510 yards and five touchdowns.

Notre Dame Knows A Little Something About Hail Marys

Notre Dame was one play away from drinking the cyanide that consumed early half of college football’s top 10 undefeateds this weekend. It wasn’t a Hail Mary, but Everett Golson’s heroics against Stanford’s chainmail defense enhanced his resume as a winner. On fourth-and-11 from the 23, Golson scrambled to his left evading the rush and spun a dime into the hands of tight end Ben Koyack, who was balancing his feet on the sideline like a professional tightrope walker. Koyack was quickly ejected out of bounds as a Stanford safety dove in an attempt to force the incompletion It was the type of play Notre Dame made last season—especially against the nation’s no. 1 defense and another reason why despite modest statistics, Golson lurks in the tall grasses of the Heisman field.

THE GOOD: CONNOR HALLIDAY (unless you're a a fan of defense)

Cal's defense lost on a Hail Mary two weeks ago.  This weekend, Washington State made it hail for 60 minutes. Halliday threw the ball 70 times (not his career high! That would be the 89 he was instructed to throw by Leach against Oregon last season) for an NCAA-record 734 yards. In addition to hurling six touchdowns, he didn't throw a single interception. Somehow though, they actually lost 60-59.

One week after putting a cape on and nearly carrying NC State to a victory over Florida State the Wolfpack were blanked and Brissett was held to four completions out of 18 attempts and 35 yards. The only positive is that Brissett did not throw an interrception. But he did fumble twice.

Aside from Deshaun Watson, the nation's leader in career QBR, true freshmen quarterbacks had a brutal week. In Auburn's rout of LSU at Jordan-Hare, Brandon Harris completed just thee-of-14 passes, a 21 percent completion percentage, for 58 yards. His was the most shocking because of how much better than Brandon Jennings he was in extesive appearances off the bench. Treon Harris may have played his final snap at Florida, Wake Forest’s John Wolford was shredded by Florida State during a 9-of-15, 58 yard passing day and Miami’s Brad Kaaya was neutralized in a loss to Georgia Tech.