When it was announced in late October that Abner Mares was returning to the squared circle after a year and a half off, it was amid a flurry of announcements by Showtime and Premier Boxing Champions.

With the boxing game forever altered by the weekly network shuffle of boxing broadcast options, it was refreshing to see that after a brief hiatus PBC was returning with seven major combat sporting events that would pit Top -10 champions versus Top-10 challengers.

Mares, the three-weight division world champion is up first and back to his title-contending ways. His last outing against Leo Santa Cruz for the WBA Super Featherweight crown, which Santa Cruz lost to Carl Frampton in July, resulted in a barnburner majority decision loss.

Mares thought he would have been back in action sooner, however per the usual boxing fare, things happen and postponements occurred. Mares had an undisclosed medical issue that prevented him from being licensed by the New York State Athletic Commission a week before his June 25th first scheduled shot at featherweight titlist Jesus Cuellar. The Barclays Center event had to be canceled.

It’s not the first time something like this has happened to me — not in the sense of me being injured or anything but a fight being cancelled, said Mares. I was supposed to fight in March, that got postponed because of an injury and then it got postponed for June and then that June fight got postponed so here we are December 10th, and again it’s just a way of seeing that mental strength and that circle you have around you.

Dropping back to featherweight, Mares is slated to do battle with Argentinian, Jesus Andre Cuellar whose only loss was back in 2011 before he hit the global stage. Since winning the interim WBA featherweight belt in 2013, Cuellar has knocked out notables like Juan Manuel Lopez, Ruben Tamayo and Vic Darchinyan en route to his truly toughest challenge in Abner Mares. 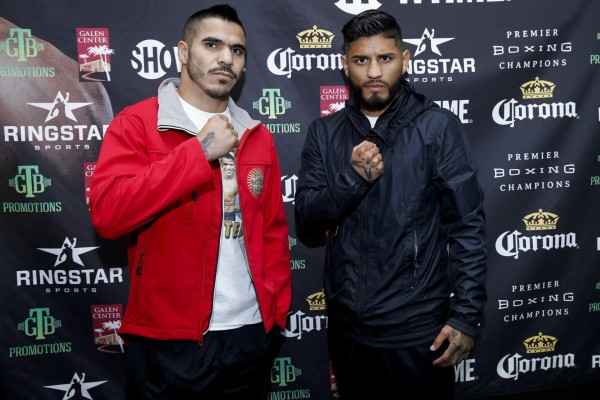 For Mares, not being in the press or the publics eye for over a year while transitioning from his Bell Gardens, CA training facility to Oxnard, CA and the revered gym of trainer Robert Garcia has been a blessing. Some see his low visibility as a career hindrance.

Mares says, if anything the postponements have allowed him more time to train.

I haven’t been in the spotlight… no cameras around me, no lights, but I’ve been active,” Mares told The Shadow League. Since March, I’ve been getting ready for the fight. Every single fight has been postponed the week of the fight, so I’ve practically done training camps for two fights.

Fighting this Saturday and in the main event slot on Showtime, Mares is in a loaded 126lb division and looks to return to glory. Many thought that Andre Wards unanimous decision win over Sergey Kovalev was the last big fight of the year but like his promoter PBC, Mares is trudging on with a champions spirit and bringing the big show right on time.